In Part 3 of this series of posts on the Arado Ar 234 build, we will take a look at the aircraft’s instrument panel and how it has been detailed to add more interest to the cockpit.

As explained in Part 2, the Arado’s glazed nose section exposes a lot of cockpit detail that would normally be hidden in other aircraft.  This is particularly true for the instrument panel, where all of its wiring and supporting structure is clearly visible.

The front of the instrument panel has been detailed using an aftermarket photo-etched part which has much crisper detail than the kit part itself.  On the other hand, the detail on the back has been scratch-built using various bits of copper wire and plastic.

Let’s take a closer look at the process.

The first task is to clean the kit part, removing all detail from both sides of the panel using a small file.

The photo-etch instrument bezels are then glued to the cleaned-up plastic panel.  At this point it was very apparent that the plastic panel is actually larger than it’s supposed to be, probably because of the way the kit is meant to go together.    Given that I was going to add the supporting structure as found on the real aircraft, I could trim the panel down to size using the photo-etched part as a guide.

That’s all there is to it with respect to the front of the panel.  We will now have a look at the much more interesting process of detailing the back.

The first step is to glue in place the individual instrument backs which were made using ‘slices’ of plastic rod.  Rods of different diameters were used to represent the different instrument sizes.

The instruments are then drilled out using a twist-drill in preparation for wiring.  Slotting and gluing the copper wire strands into these holes will help create a stronger bond and makes bending the wires into shape that much easier.

The wires are then bent into shape and trimmed to the required length.

At this point the wire acting as the support frame is cut and bent into shape and the whole assembly is test-fitted to the rest of the cockpit:

Adding the rest of the supports

On the real aircraft, the instrument panel is supported from the top and back by a tubular structure which connects to the rest of the nose framing.  Getting the angles right in such a situation can be tricky so as a starting point I plot out the instrument panel position with respect to the ‘canopy’ as shown below.  This was done by dry-fitting the panel to the cockpit and securing the canopy in place with some masking tape.  I then measured the distances using a flexible rule.

The first bit of wire is bent to shape using the template as a guide.  It is important to get the angles right at this stage and any extra length of wire can be trimmed later. 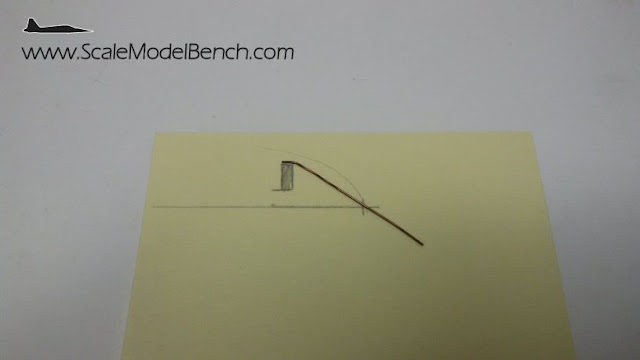 The second length of wire is added and both are secured to the template using some masking tape as shown below: 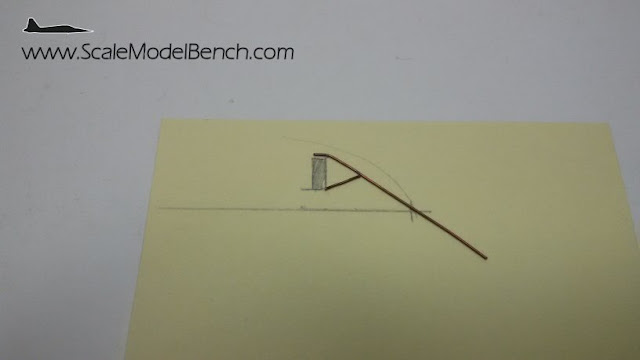 Finally I add a tiny drop of superglue with the help of another bit of wire, just enough to bond the two parts of the structure together.  This the most delicate part of the process as putting too much glue will fix the whole assembly to the paper template.

This process was repeated once more to create two identical assemblies which are then glued in place at the back of the instrument panel.

Finally, the whole assembly is once more test fitted in place to check out the dimensions and trim any excess. 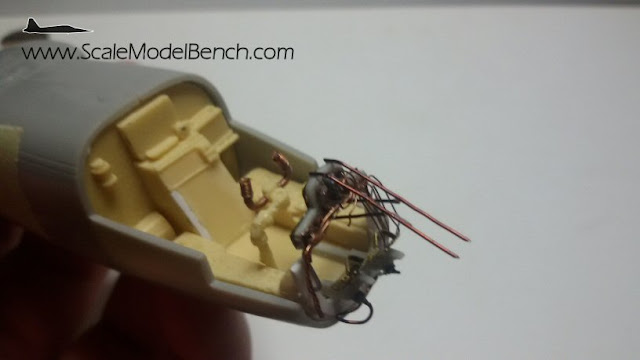 That concludes todays post which focused on adding detail to the instrument panel which is a very prominent feature in Arado Ar 234’s cockpit.

Part 4 will focus on the other end of the cockpit specifically the seat and bulkhead and hopefully conclude the chapter on the cockpit.  I’m treating the canopy itself, with its intricate framing, as a separate project and will be tackled in future posts.

In the meantime Happy Modelling.
Posted by Wayne Zammit at 15:03