One of the Arado 234's striking characteristics is its completely glazed nose which exposes much more cockpit detail than would normally be seen on more 'conventional' aircraft.

In my previous post I had promised myself (and anyone reading for that matter) that this would be a straight-forward, no-frills build but after looking at a number of photos of the last surviving Ar 234 I just could not help myself - that cockpit begs to be detailed. 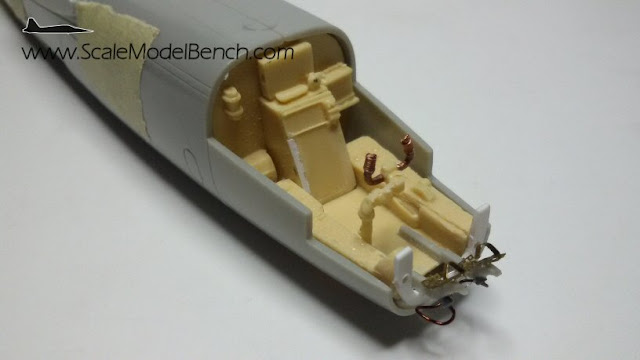 As previously mentioned, I had a number of aftermarket detail parts for this kit, a fair number of which are resin.  This is especially true for the cockpit as the entire cockpit tub, detail and rear bulkhead are resin parts, so the first thing to do was to clean the various bits.

Quick Tip
Resin dust is hazardous for the lungs.  Make sure to wear a protective mask when sanding, cutting, drilling and cleaning resin parts and clean your work-space when you're done.  You may find it convenient to work on all the resin bits in one go.

After preparing all the resin, I started working on the cockpit tub.  I needed to use the rudder pedal supports from the original kit part so they were sawed off using the same micro-saws used to cut out the wing control surfaces as shown in part 1 of this series.

These were then glued to the resin cockpit floor using super glue.

Once dry I proceeded to add the photo-etch rudder pedals which are much nicer than the plastic parts that come with the kit.  These were bent into shape with the help of some tweezers and fixed in place using super glue.

Use a sharp round edge of a number 10 blade to separate photo etch parts from their fret.  Make sure to cut on a hard surface such as a metal block to prevent the fret from bending when you apply pressure.  Try to be as precise as you can and cut as close to the part as possible as filing away any extra bits can be tricky.

I then tackled the control column which was also supplied in resin and is much more accurate than it's plastic counterpart.  The aftermarket control column came in two parts, the column itself and the handlebars.  I wasn't happy with the detail on the handle bars - which is another way of saying I broke them whilst cleaning off all the flash - so I fashioned my own using some copper wire.  You can see the result next to the original kit part in the image below:


Preparing for the instrument panel

The instrument panel on the Ar 234 is held in place by a number of supports, two of which come out from a "U" shaped panel on the front of the cockpit tub.  The kit instructions would have you glue the instrument panel directly to the canopy... something I would like to avoid because a) it's not accurate and b) it just would not look right.  First off the "U" panel...

The following sequence of photographs shows how this was fashioned out of plastic-card:

Here's a shot of the panel, fixed in place and drilled in preparation for the instrument panel supports. The gap seen on the left is due to the cockpit tub shifting whilst taking the photo.
I also added some wiring detail to the rudder pedals.

In the next post I will tackle the fiddly instrument panel itself, including the scratch built wiring and supports.